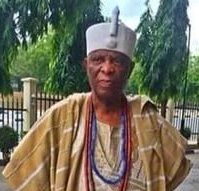 The occasion was the culmination of a series of activities lined up to mark the auspicious double celebrations of the monarch and it was a gathering of who is who from the political class, academia, religious and traditional institutions.

The governor of Edo State, Mr Godwin Obaseki, was represented by the Commissioner for Culture Tourism and Diaspora Affairs, Bamidele Obaitan while the Deputy Governor, Comrade Philip Shaibu, was represented by the Head of Local Government Administration (HOLGA), Akoko-Edo Local Government Area, Innocent Alenoghena. Also at the event were present and former members of the state House of Assembly, former council chairmen and other top politicians.

The ceremony also had in attendance, traditional rulers from across the local government area and other parts of Edo North and Edo Central Senatorial Districts led by the Otaru of Auchi, HRH, Alhaji Aliru Momoh Ikelebe III.

From the academia, the rector of the Federal Polytechnic, Auchi, Dr Salisu Umar was represented by the Deputy Rector, Administration, Dr Bamidele Agbadua. former Registrar, Ambrose Alli University, Sir Chris Adamaigbo among others attended the occasion.

In his speech, Obaitan said the Obaseki administration has concluded arrangements to revitalise the Ojirami Dam in order to provide and supply portable water to the entire local government area.

Besides, he said the government is developing a tourism master plan aimed at creating job opportunities for the people of Edo state.

Governor Obaseki said: “We are working on a tourism master plan to develop the tourism potential in Edo.”

“Akoko Edo abounds with huge tourism potentials and the local government is part of our tourism master plan due to various tourist sites in the area.

“With the development of the local government tourism potentials, the area will bring more businesses and money to the people and the state.”

On Oba Saiki’s celebration, he said “I must congratulate you on your 25 years as the Otaru of Igarra and your reign has brought valuable services to the people of Igarra.

“As you mark your 25th year’s coronation anniversary, may Almighty God grant you many more years on the throne,” Obaseki said.

In his welcome address, a representative of the community, Tajudeen Alade Esq, said that Igarra is celebrating over two decades of peaceful and successful reign on the royal throne.

He said “This is why with one voice all members of Igarra community are praying that God in his infinite mercy continues to protect and guide him, give him good health, long life, wisdom and zeal to usher into his domain greater unity, love, peace and accord him all necessary ingredients for the development of his immediate domain.”

He however appealed to the state government for the establishment of a processing or manufacturing industry to provide both manufactured materials due to different solid minerals that abound the local government.

He said his reign has brought meaningful development to the area. According to the monarch, “I am immensely grateful to Almighty God and our ancestors for the protection and guidance accorded me since Sept 20th 1997 when officially I was installed as the 21th Otaru of Igarra.”

“Since my coronation as the Otaru of Igarra and the paramount traditional ruler of Igarra/Akuku Clan, I have been having the very best cooperation and wise counsel of the state government, Akoko Edo local council, traditional rulers council, palace chiefs, elders and the entire people of Igarra community.

“Their collective contributions have made governance in Igarra peaceful,” he said.

The Otaru, enjoined every Igarra person to have a new heart that exhibits love and a new spirit that must promote unity and not division in the community.

The monarch appealed to the state government to establish a higher institution in the local government for more development in the council area.

Highpoint of the event was chieftaincy titles and honours bestowed on some outstanding individuals including the Vice Chancellor of the University of Benin, Prof. Lilian Salami as Oganete of Igarra; Dr Mariam Ibrahim, Deputy Director Admin, Legal Aid Council of Nigeria as Otuonoguvo of Igarra.

The ceremony was heralded with the royal Arigede dance.

Other events included Arigede dance round Igarra, Etuno language recitation of the Nigerian National pledge and Ikede dance even as other events are planned for the celebrations which span the rest of the month.

Oba E. A. Saiki II (JP) was still working at the University of Lagos when it became the turn of Andiba Royal Family to produce the king, following the transition to glory of His Royal Highness Okuo Luse II. His family, having the confidence that he was qualified to become the next king, asked him to return home as the position was vacant. But there were other members of the family who were also interested in occupying the throne. The Andiba Royal Family had a meeting and decided to select a person out of the three or four of them who were eligible and he was the one chosen.

His name was then submitted to the five ruling houses that were to take the final decision. They fixed a date for a meeting with the senior Okomayin regent. The Okomayin title is next to the Otaru title in Igarra. Whenever Otaru is not around, the senior Okomayin takes over the position as the next in command. The meeting was held and he was finally chosen by the five ruling houses. That was in 1997.

He was pronounced as the chosen Otaru on September 20, 1997 by joint meeting of the regent and the five ruling families and he immediately started the 90 days seclusion which was part of the initiation rites to prepare him for the throne. He was presented with the staff of office on May 1, 1999.