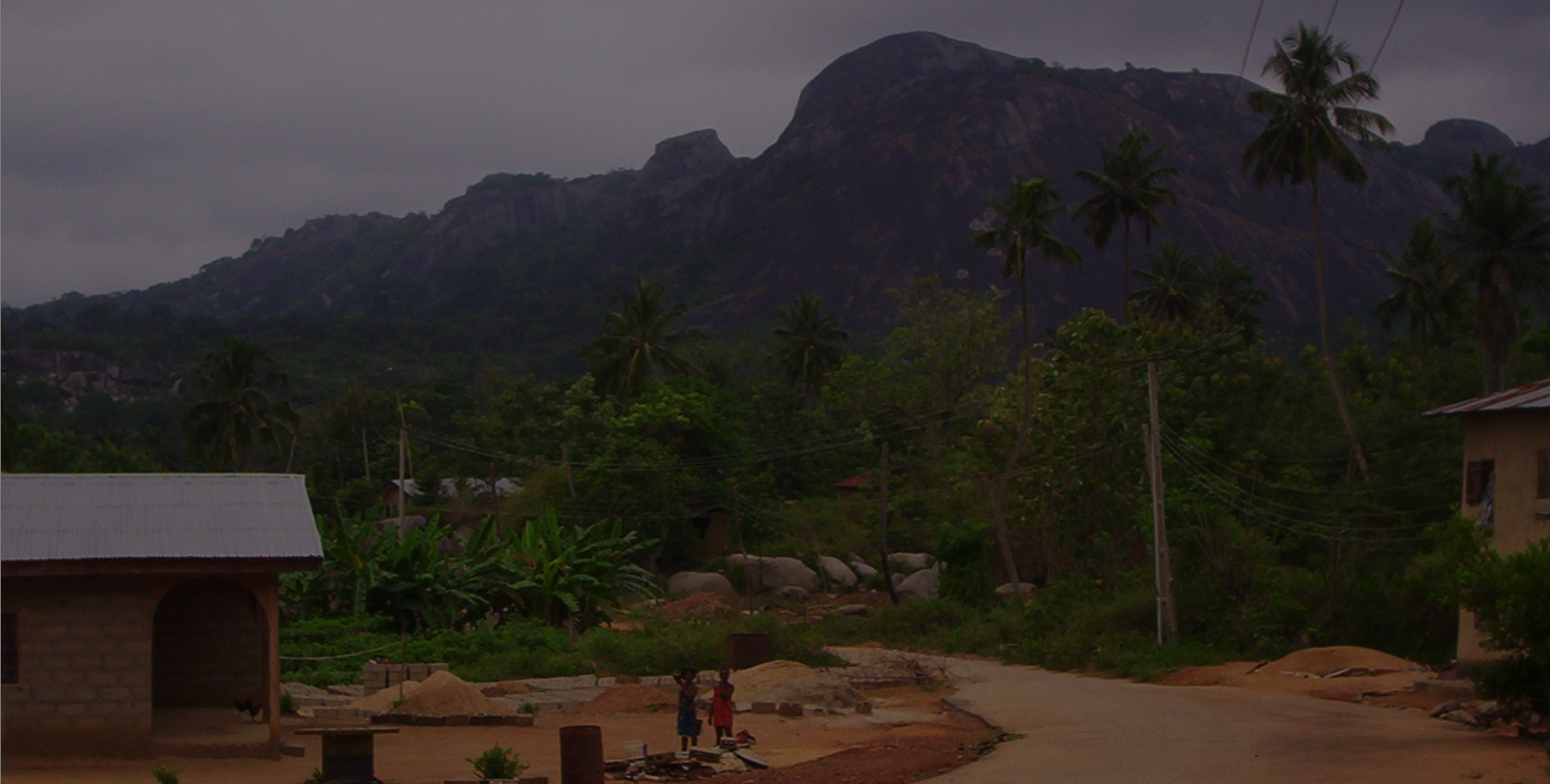 The founding fathers of Igarra migrated from Idah in present day Kogi State under the leadership of Ariwo Ovejijo who was a prince in Idah and who left Idah with his supporters because he felt cheated of his right to ascend the throne of the Attah of Igalla many centuries ago. He and his followers, made up of all the present families in Igarra, founded Igarra and he became the first ruler who ruled over his followers in the new kingdom under the title of “Otaru Ariwo Ovejijo Oshinoyi Etuno” meaning “Otaru Ariwo Ovejijo, King of Igarra people,” which, up till today, is still the traditional eulogy or appellation for the Otaru of Igarra.

Apart from the fact that the oracle favoured the settlement at the present site called Igarra, other factors that contributed to their final decision to settle here, include the following:

At the time of the migration, one of the women that came to the present site with Ariwo Ovejijo haboured in her had some grains of guinea corn accidentally or deliberately. This woman was believed to be from Eziakuta family – one of the families that was loyal to Ariwo Ovejijo. This guinea corn grew up, was harvested and regrown. This is probably the reason why the Eziakuta family play significant role in the (osisiakumeme) “Ete” is Igarra means land or soil. “Osisiakumete” therefore means the appeasement of the god of the soil and harvest. It is on this day that Upe Enu date is fixed. (Upe Enu is the new yam festival in Igarra).

As stated earlier, Ariwo Ovejijo and his migrants met every few people residing on the hills of Igarra. These were the Anafuas (midgets), Anivas (foolish people) and Andokonis. Very little is known about these people except that they lived in caves and their life style was simple and unsophisticated compared to the Igarras. These people were eliminated when they were to constitute a menace to the Igarras after settlement. They were either killed or driven away from the area to join their kith and kin in the former Congo basin (pygmies of the Congo Basin). They are remembered till today by the Arigede song “Andokoni van reku ayi Ido wa” etc meaning Andokonis were our enemies and we conquered them. The Anafuas were a cunning set of people who uses the strength of the Anivas to their advantage. The Anivas are believed to be very powerful that they could lift very big stones as barricades against the enemies of the Anafuas. The unfortunate thing amongst them was that they were very foolish hence any foolish behavior in Igarra today is attributed to an Iva blood on any one.

The head of these people coincidentally was called Uno from which Igarra could have also derived its name ‘Etuno’ meaning the land of Uno. The Anafuas were very good trader in beads. They exchanged their beads for farm products. The use of cowries as a medium of exchanged was further strengthened. ‘Ovene’, ‘Isu’, ‘Ofa’, and “Opa” were the different types of beads these Anafuas traded in.

The Igarras, on arrival lived peacefully with the aborigines who only tolerated rather than accommodated the Igarras. They (Anafuas) were less sophisticated in terms of war implements.

These aborigines (Anafuas) engaged the Andokonis and Avives as mercinaries who helped them to fight wars for them. They (Anafuas) had no developed forms of amusements as against the Igarras who loved music. The Anafuas (aborigines) hated the sight of Arigede drums, Isue (gong) Ofa and other forms of musical instruments. Unlike the Igarras, the Anafuas celebrates their own feast which would involve drumming only once in six years during the Irepa festival. Anafuas and the Igarras fell out with each other when they could no longer tolerate themselves. The Anafuas were considered a menace by the Igarras, above who the Igarra claim superiority. The Anafuas no longer catered for the welfare of the Igarra children which they were noted for doing when the Igarra went to the farm. Instead, they resulted to killing the children. This state of affairs between the two could no longer be tolerated by Ariwo and Uno who were the leaders of the two groups

In fulfillment of his promise, Uno had no choice but to vacate the land with his people for Ariwo Ovejijo and his people. Before their final exit, Uno the head of the aborigines (Anafuas) took the soil of the land and handed it over to Ariwo Ovejijo, instructing him to appease the land yearly. The name Etuno was then probably derived from the name Uno meaning the land of Uno. The yearly appeasement of Igarra land by the people of Igarra is now known as Ubete. Ete in Igarra means land or soil. This annual festival is usually presided over by the paramount ruler of Igarra which is the reigning Otaru. He has the instruments in his custody. It is customary that on the day of Ubete festival, farming instrument like hoe, cutlass and anything made of iron for digging or tilling the soil are usually not seen. They are usually hidden. It was a curse for any Igarra person to die on that day as the corpse would be thrown into the bush for the vultures to devour or the person would be buried in “Irisi”. Irisi is the softest spot in the house through where water flows out – a kind of gutter. This is because it is easier to dig this portion with stick and hand as no digging instruments are seen on that day. In modern times deaths on this day are not reported or announced until after the festival.

It is believed that Ariwo Ovejijo and his followers got to Etuno on an Amomo day (one of the four days in the calendar inherited from the Anafuas).

The migrants made a brief stopover in the present Ajaokuta, the place their forefather worshipped the god of Idakoriko. Here Ariwo and his people took some soil and piece of the stone at the shrine of Idakoriko and brought it to the present Ekuto (Igarra). From Ajaokuta they went westwards as instructed by the oracle (Eva) to another site. The site apart from the undulating nature of the lands, was fertile for the growth of beniseed (Igorigo). At this point, there was division among the migrants. Some members favoured settlement and the party that favoured settlement on side did settle.

He (Ariwo Ovejijo) acquired the land from Uno on Ube day, hence the feast of Ubete is usually celebrated on Ube day. The aborigines (Anafuas) were known to have vacated the land finally on Ude day. This was followed by merriment on Ofosu which was the following day. Ube and Amomo are very significant days in Igarra. Amomo is usually regarded as a resting day, in which certain age groups do not go to farm. A violation of this will result to a fine of certain amount of money or a cock in the alternative.

As said earlier, the Igarras lived in harmony with the people of Anafuas, the aborigines. Many things were inherited from this people amongst which are:-

(a) Four-day calendar (Amomo, Ude, Ofosu and Ube);
(b) The opa age – group system, including Irepa festival which is celebrated once in six years.
(c) The age-group names like Aisevbepe, Ujayuko, Aigbomade, Aiterukoni etc were all derived or inherited from the Anafuas so also Aniva and Andokoni language.
(d) The use of cowries as medium of exchange was further strengthened as mentioned earlier. “Ovene”, “Isu”, which are a bunch of coral beads, were used as medium of exchange.
(e) Aiyo was believed to have been inherited from them by the Anonyete family. Other Aiyos owned by any other family apart from that of Anonyete is a replica or copyright. This traditionally called “Inyama Gereshe”.

As said earlier, the Igarras lived in harmony with the people of Anafuas, the aborigines. Many things were inherited from this people amongst which are:-

(a) Four-day calendar (Amomo, Ude, Ofosu and Ube);
(b) The opa age – group system, including Irepa festival which is celebrated once in six years.
(c) The age-group names like Aisevbepe, Ujayuko, Aigbomade, Aiterukoni etc were all derived or inherited from the Anafuas so also Aniva and Andokoni language.
(d) The use of cowries as medium of exchange was further strengthened as mentioned earlier. “Ovene”, “Isu”, which are a bunch of coral beads, were used as medium of exchange.
(e) Aiyo was believed to have been inherited from them by the Anonyete family. Other Aiyos owned by any other family apart from that of Anonyete is a replica or copyright. This traditionally called “Inyama Gereshe”.

Among the antiquities left behind by these people are some forms of drum which were inherited by some Igarra families. Example of this is Arido drum collectively owned by Eshinagada, Eshimozoko and Anoseri. The Omo, Isu and Ovene left behind by these people were neither sold nor kept in custody of anybody. They were kept in the custody of gods in the hills. These relics are still to be found today in Igarras hills. They cannot however be stolen. Legend had it that a desperate hunter who wanted to get rich overnight tried to steal these precious coral beads but failed. It is believed that he hunter could not trace his very back to the plains after carrying the beads. He was only able to trace his way back after he left these beads behind. When he did not succeed in the first attempt, he devised another method by feeding his dog with the beads stocked into a meal of pounded yam; in short, the dog could not escape with these beads until after defecating them.

At the time Igarras arrived at the present site, there were no external aggression or inter-tribal wars. This made settlement on the valleys possible. They lived in small groups made up of family units known as “Andaduma” in Igarra. They settled in places like Irikudimi, Ozedi, Ozuwo, Abasama, Enachi, Une, Aboro, Upogo, Orere, Aribe, Uttua, Ivisheba etc, while places like Akuku and the present land occupied by Ewan, Akene etc were used for farming by the individual families. These lands, where each family farmed, were later converted to personal effect or family property.

The land now being occupied by the people of Enwan and Akuku were sold to them at about the middle of the 18th century when they migrated to the area. The royalty accruing from these areas were to be paid over a period of two centuries (200 years). This payment was in the form of palm oil and yams and was usually paid to the reigning Otaru. The payment was lasted till the second half of the twentieth century in the reign of His Highness Idanage, the then Otaru from Eshinogu ruling house.